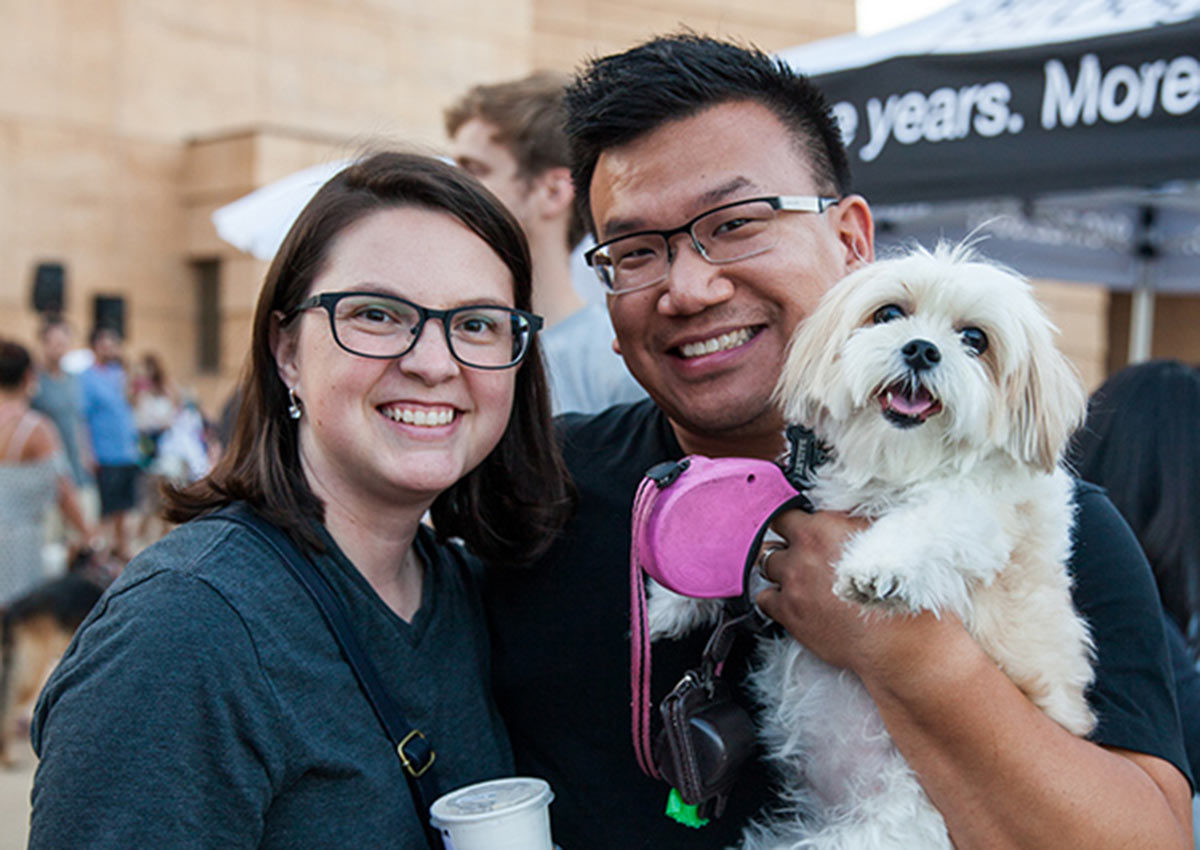 How Dogs Help to Define DTLA

Dogs play an important role in our lives and even more so in the current environment, providing company and comfort during uncertain times. Learn how Downtown Los Angeles became a haven for dog owners and why our community celebrates Annual Dog Day every year.

Today, Downtown LA is a community of ardent dog lovers. Out of 75,000 residents, nearly one third of them own dogs, and dozens of pet-related and pet-friendly businesses dot the neighborhood, serving humans and canines alike in the heart of Los Angeles.

It wasn’t always that way. Twenty years ago, the Downtown Center was known for industries such as banking, government, and insurance or law, but it was far from the vibrant neighborhood it is today. Dogs had a paw in changing that.

In 1999, after the City of Los Angeles passed the Adaptive Reuse Ordinance, it became easier for developers to convert existing, but underutilized, commercial buildings into apartments and condominiums, creating more housing while preserving the city’s historic architecture. The first project completed under the new ordinance was the Old Bank District, a three-building project in DTLA’s Historic Core. Originally constructed in the early 1900s for local banker Herman W. Hellman, nearly 100 years later, developer Gilmore Associates converted them into 230 loft-style apartments and hired Hal Bastian, former Executive Vice President of Economic Development at the Downtown Center BID, to lease them.

At the time, the Historic Core was an underdeveloped area without much of a residential population. A seasoned real estate broker but new to leasing apartments, Hal sought the best approach for renting out the units.

The buildings had been renovated with epoxy floors, a popular material for flooring because it is extremely durable and easy to clean. Ideal, say, for tenants with dogs. As an avid dog lover, Hal had an epiphany. “It’s as if I heard, audibly, ‘Be dog-friendly. Let’s accept dogs.’”

By actively welcoming dogs and their humans, who found difficulty renting apartments elsewhere, Hal had launched a movement. Dog-friendly apartments were in. Other developments followed suit and began to allow pets. DTLA’s residential population surged and, within the first two years, about 150 canine tenants moved into the Old Bank District.

As more residents relocated downtown, shops and restaurants sprung up to service them. The neighborhood grew and flourished. A dog-friendly community was born.

To celebrate, Hal and the DCBID devised an outdoor event to bring the neighbors and dogs of DTLA together. The 1st Annual Dog Day in 2007 was held on the Cathedral of Our Lady of the Angels’ plaza and gardens, a public space where the people, dogs, and local businesses that have aided in the transformation of the city could collectively meet up.

Fourteen years on, we continue to host the festival every year because we love the people that make up our community, the furry friends that enrich our lives, and the local pet-related businesses that enliven our neighborhood and make it unique.

Just as the city has changed and grown over the years, Dog Day has as well. The 14th Annual Dog Days Celebration has gone virtual this year to ensure the safety of both humans and pets, but the spirit of the event remains.

Join us in celebrating the 14th Annual Dog Day virtually from September 21st to October 2nd. Visit DowntownLA.com/DogDays to browse heartwarming images and videos, support DTLA’s pet-oriented vendors, and sign up for discounts, specials, and prize giveaways for you and your pet.