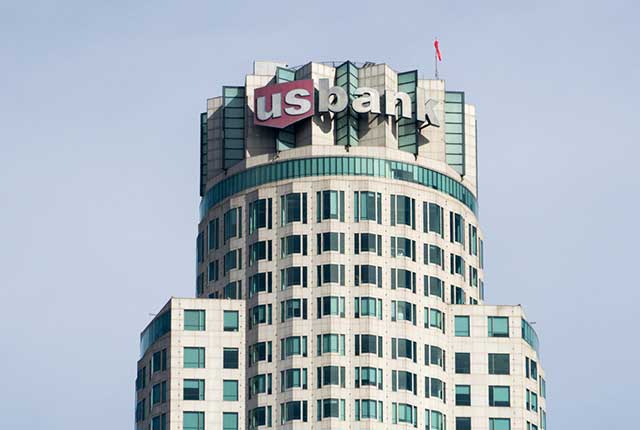 Hacking the Highrise – US Bank Tower

Arguably the most iconic building in Downtown LA, the US Bank Tower was, until recently, the tallest building in the Western United States, and is still a prominent feature of the skyline. When Singapore-based OUE purchased the property in 2013, they immediately set to work on major capital improvements to reimagine it from top-to-bottom.

At ground level, the most dramatic improvement was the lobby renovation, including floor-to-ceiling glass curtain walls and the installation of the largest high-resolution video screen in any office building in the country. At 2,142 square feet with over 10 million pixels, the display is almost half the length of a football field and not only dominates the lobby, but can also be viewed from nearby streets. Los Angeles-based StandardVision’s content delivery system uses artificial intelligence to change the flow of music and visuals with the movement of pedestrian traffic, and draws heavily on local creative partnerships in curating the programming.

Adjacent to the lobby, OUE also redesigned and landscaped the popular Bunker Hill Steps connecting the Financial District to Bunker Hill. With lush greenery and a renovated building entrance, these upgrades have greatly improved the environment surrounding the tower and enhanced the experience for the many people who use this vital connection – once again demonstrating the ethos of Hacking the Highrise – inside, outside, and all around, for a new era of city living and a new generation of tenants.

At the other end of the building – 70 stories up in fact – OUE embarked on an even more ambitious project with the creation of OUE Skyspace LA and the opening of fine-dining restaurant 71Above. Although tourists are the primary audience for Skyspace LA--an observation deck with 360-degree views and a glass slide-- the space also serves as a unique and dramatic amenity venue for tenant events. The same can be said for 71Above, which has emerged as one of the top restaurants in DTLA.

All of these investments are about heightening the appeal and experience of the building to retain existing tenants and attract new companies. On that front, OUE’s efforts have been an unqualified success. Since purchasing the property, it has had over 250,000 square feet of positive net absorption, cutting its vacancy rate in half. In a small but telling example, one of the new tenants taking space in the building is Hush, an online beauty products retailer that is emblematic of both the changing DTLA tenant base and the growing appeal to such firms of a reimagined highrise like US Bank Tower.