Hacking the Highrise is about how DTLA's office towers are being reimagined for a new era of city living and a new generation of tenants.

We're looking inside, outside and all around: office spaces, common areas, infrastructure, technology, amenities, social activity, and cultural programming that connects people and companies within their buildings and to the surrounding neighborhoods.​ 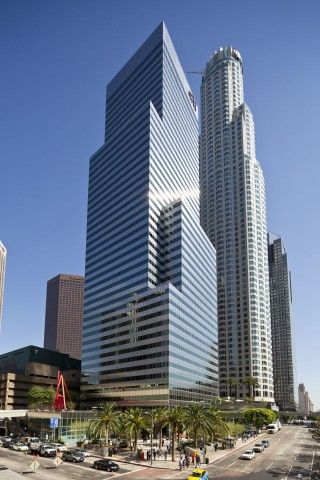 Coretrust Capital Partners purchased FourFortyFour South Flower, formerly known as Citigroup Center, in late 2016. While the company is new, the owners have strong connections to Downtown LA as original partners of Thomas Properties Group, previous owners of City National Plaza. Under their new banner, Coretrust has quickly embarked on an aggressive and innovative plan to modernize the highrise for a new generation of tenants from innovative industries like tech and media that have been diversifying the mix of companies in the DTLA office market.

FourFortyFour South Flower showcases "The Art of the Workplace" with an impeccable collection of public art on display throughout its public areas. Funded from 1% of the original construction costs in 1981, the building commissioned five internationally recognized artists, including Robert Rauschenberg, Frank Stella, and Michael Heizer, to create the artwork for public display. In the recent capital program, Coretrust added a new painted art mural throughout a long, narrow passageway. The building's artistic environment adds further appeal to tenants from creative industries like architecture, design and media.

A highlight of Coretrust's multi-million dollar capital program at FourFortyFour South Flower was converting the 6th floor into a Workplace Innovation Lab -- an interactive, collaborative, contemporary setting for creative companies, designed by Gensler and fully furnished by Haworth, whose showroom occupies the top floor of the property. The Lab introduced the first of the building's so-called "sky gardens". Constructed to take advantage of the "steps" in the tower's design, these outdoor spaces on the building's upper levels are a unique amenity that connects its tenants to the surrounding cityscape.

The 48-story, stainless steel and glass landmark tower is LEED Gold certified, earned the BOMA Earth Award in 2012, and has been an Energy Star Label recipient for the past 11 years. While the external façade of the tower at FourFortyFour South Flower has not changed since Coretrust took over, the property offers some of the most unique outdoor spaces of any property in Downtown LA. Multiple plazas are found at multiple levels on all sides of the building. Working with Gensler, Coretrust is enhancing these spaces, improving the connections between them, and expanding the amenities within them.

A wealth of amenities are key for the new era of city living that DTLA's highrise properties cater to, and FourFortyFourr South Flower has many appealing options. Home to Equinox gym, earthbar, Starbucks, and Mendocino Farms, tenants have access to a host of options for a quick bite or a longer break close to the office. There's even a barbershop, pharmacy, and carwash at the building.

FourFortyFour South Flower epitomizes the innovation and creativity of DTLA's dynamic work culture and vibrant art scene, with its cutting-edge Workplace Innovation Lab and world-class public art collection. Coretrust's bold reimagining of the property appeals to a new generation of tenants attracted to an urban lifestyle that puts a premium on connecting people and places —by breaking down boundaries and creating flow, within organizations and the building and to the surrounding city. In all of these ways, FourFortyFour South Flower embodies the workplace of the future in the DTLA of today.​