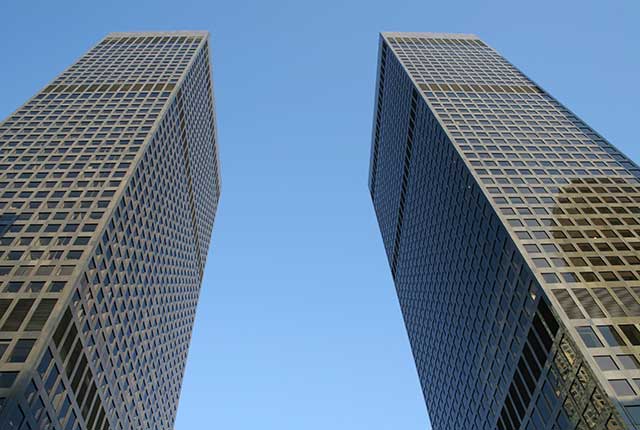 City National Plaza was the original inspiration for Hacking the Highrise. It was Gensler’s Rob Jernigan who coined the phrase when talking about how City National Plaza accommodated their relocation from Santa Monica and embraced Gensler’s radical plan to convert an old corporate bank office into a state-of-the-art creative workplace. Six years later, Gensler and building owner CommonWealth Partners have produced one of the most dramatic and successful transformations of office tower space in Downtown LA.

Among the custom elements incorporated into Gensler’s space are an expansive skylight cut into the roof and a mezzanine floor suspended from hangers. For a later expansion, they designed a bridge connecting their space in the property’s “jewel box” with two floors of new offices in the North Tower.

CommonWealth Partners undertook a similarly ambitious renovation for the Boston Consulting Group. Again, creating an additional floor out of previously underutilized storage space, this time showcased by dramatic double-height windows literally hacked out of the façade at the top of the building. The innovation and creativity behind these major projects is what highrise hacking is all about.

While these interior renovations have been bold and impactful, the most visible and widely enjoyable element of the reimagined City National property is its signature plaza. What was previously underutilized space is now filled with comfortable furniture, native plants, plenty of shade, and a premier coffee bar, creating what its designers call an “Urban Living Room”. Today, the space teems with activity and provides a real connection between the property, its tenants, and the surrounding neighborhood.

Upon closer inspection, more subtle enhancements are revealed. The newly renovated lobbies feature doors that open completely to the plaza, integrating inside and out and creating an easy flow across the property. Nestled behind the building lobby is an imaginatively designed indoor/outdoor tenant lounge for events and socializing. The buildings was also among the first to offer bike storage and a bike share program, and they are continuing the upgrades throughout the Project including repositioning of their subterranean retail spaces.

CommonWealth Partners has been involved in the ownership and development of multiple DTLA Class A office properties for many years and acquired City National Plaza in 2013. In just five years, they have significantly transformed a conventional building designed for traditional tenants into an innovative workplace that supports the needs of creative and entrepreneurial companies and their employees, and provides  common area spaces that enhance not only the property, but the community at large. That’s what we mean by #DTLA: Make It Yours!