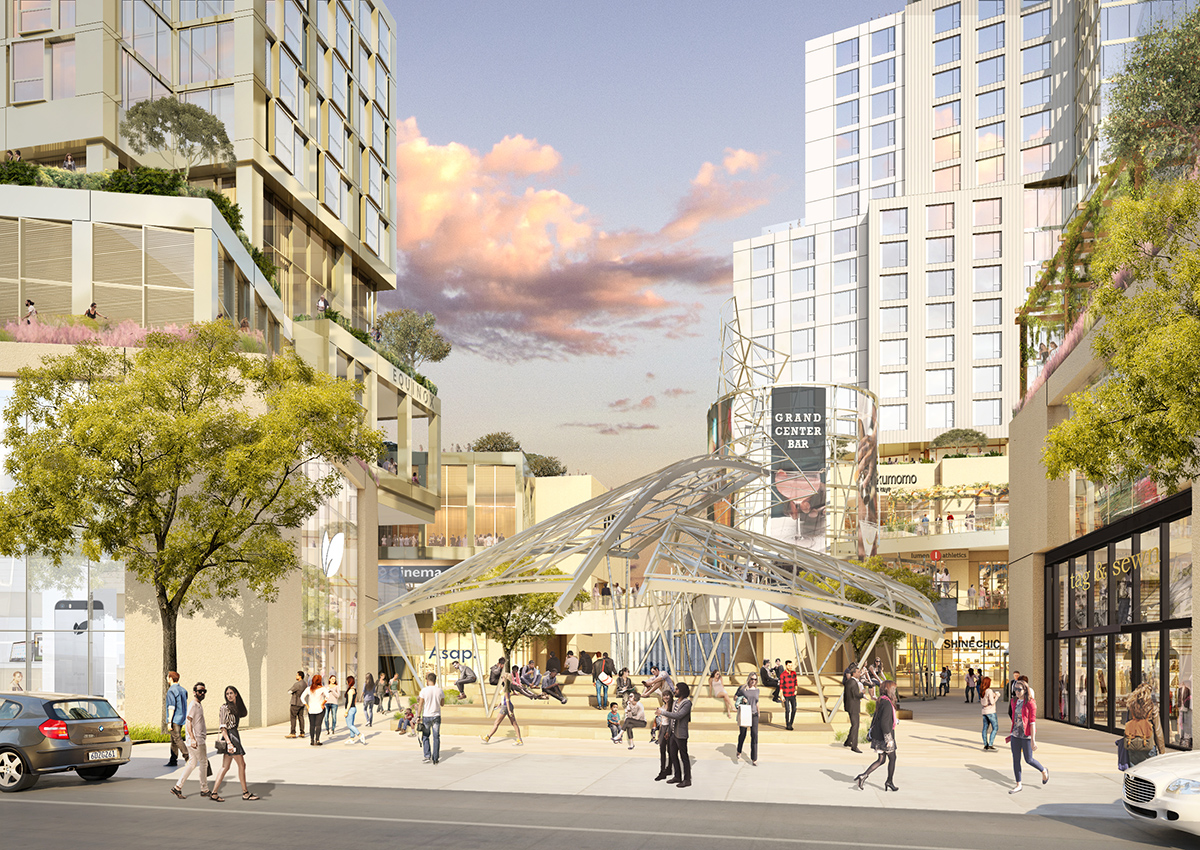 There is no place quite like Bunker Hill in Downtown LA. Like most neighborhoods, Bunker Hill has a rich, complex, and multi-faceted history. Since the 1800s, the area evolved through many different eras, each reflective of its own unique times: from Victorian mansions to working-class boarding houses, through decades of urban redevelopment to the Bunker Hill we know now. Today, it is home not only to sweeping Class A office towers and public plazas but also celebrated museums, galleries, and performing arts institutions in a renowned arts and culture corridor that showcases the pulse of DTLA. And, like so much of today’s Downtown, Bunker Hill has a growing residential community as well.

The new year of 2021 finds Bunker Hill in the midst of an exciting expansion and revitalization featuring some of the most anticipated developments in Downtown history–projects that will provide a broad range of housing, hospitality, and amenities, along with increased accessibility, connectivity, and a sense of community to residents, workers, and visitors alike. With its world-class collection of cultural institutions and skyscrapers complemented by new residential, hotel, retail, and public spaces, Bunker Hill is transforming itself into an urban center on par with the great cities of the world.

The progress of one key project has really captured the moment and the new peak to which DTLA has ascended. The Grand, designed by world-renowned architect Frank Gehry, is the crowning Bunker Hill development that most vividly reflects the present and future aspirations of both DTLA and Greater Los Angeles in its connection to culture, community, and commerce.

This transformative development by The Related Company is a mixed-use project at the core of DTLA's landmark cultural scene that brings new residential, retail, and hospitality to Bunker Hill. With a construction cost of more than $1 billion, the project comprises 426 apartments (including 89 low-income units) in a 39-story residential tower, 171,000 square feet of restaurant and retail space, and 309 rooms at the first Equinox Hotel in Los Angeles, The Grand signifies the urban revitalization of Downtown Los Angeles and its reemergence as a leading destination to shop, dine, and live in the city.

Shops, restaurants, entertainment, and a vibrant open-air “outdoor urban room” will serve as the central plaza for pedestrians to enjoy and explore while connecting multiple areas of the evolving neighborhood including: the Walt Disney Concert Hotel located across the street, the nearby and immensely popular Broad Museum, the esteemed Colburn School (with its own Gehry-designed expansion in the works on an adjacent site), and the iconic Music Center, which completed a $40-million-dollar renovation of its majestic plaza in 2019.

The Grand will also feature moving digital projections on the exterior metal surfaces of the Walt Disney Concert Hall, timed to live musical performances inside by Los Angeles Philharmonic in an initiative that will provide unforgettable arts and music experiences that are accessible to everyone. The Grand is currently under construction and is expected to open in 2021.

The property will also feature a private club and hospitality lounge reserved for Brookfield’s Bunker Hill office tenants, called The Peak at Halo. It will provide meeting venues, outdoor dining, a wellness studio, and a private bar operated by the flexible office space company Convene.

Wells Fargo Center’s outdoor areas have been upgraded with newly-designed entrances, corridors, and seating areas by award-winning landscape architecture firm GGN to create a welcoming oasis, connecting people outdoors in a dynamic gathering space that is steps away from the most iconic and cultural sites Bunker Hill has to offer. Halo is expected to open in 2021.

California Plaza is a mixed-use complex in the heart of Downtown’s Bunker Hill that is home to 1Cal and 2Cal, 42- and 52-story Class A office towers, the Cal Marketplace, and what was formerly known as the WaterCourt.  Since 1986, this location has hosted the Grand Performances series of free outdoor concerts and live events on the WaterCourt Stage, which consisted of a performance space surrounded by the Cal Plaza water fountain, and the Marina Pavilion Amphitheater.

In a partnership by CIM Group, Omni Hotels, and Rising Realty Partners, the WaterCourt is undergoing a dramatic renovation into a beautiful outdoor amenity called The Yard. By removing the 43-foot water feature entirely, which had been susceptible to leakage beneath the structure, the Gensler-designed project reimagines a venue that allows for closer proximity between the stage and audience, allowing for better engagement, and creating a 1.5-acre community plaza with verdant landscaping – abundant grass, lush trees, potted plants, and public seating. It also expands concert seating from 400 to 600 chairs on the new lawn for a more usable and accessible experience.

Soon to be a modern, multi-functional space for both tenants and the general public, The Yard will play an integral part in the dynamic ecosystem of workplace, amenities, and community space on Bunker Hill. It is slated for completion in 2021.

The Colburn School is a world-class performing arts school in Downtown LA. Frank Gehry has also been selected to design the school’s expansion, which will dramatically increase the school’s presence on Bunker Hill and further enhance Grand Avenue’s status as one of the largest concentrations of performing and visual arts organizations in the world.

The expansion includes the addition of three new state-of-the-art performance venues: a 1,100-seat concert hall, a 700-seat studio theater, and a 100-seat cabaret-style space. These will give the school its first hall for full-size orchestra performances, a venue for its burgeoning dance program and for opera, and a range of options to meet the demand of partner institutions and community stakeholders. Classroom, rehearsal, and student housing spaces are also included in the expansion plans.

The Colburn expansion is a significant addition to the long-held dream of a world-class cultural district in Downtown Los Angeles. It is also a great opportunity to further strengthen the school’s relationship to other cultural venues like The Music Center, Walt Disney Concert Hall, The Broad, and the Museum of Contemporary Art – all on Bunker Hill.

Mobility, accessibility, and connectivity are key elements to any urban center. Fortunately, the Metro Regional Connector project will improve all of them for Downtown LA, and nowhere more so than on Bunker Hill.  A 1.9-mile underground light rail system in DTLA that will link multiple rail lines between Union Station and 7th Street Metro Center Station, the $1.756 billion project will provide greater connectivity to the rest of the region and increased convenience for commuters by eliminating the need to transfer between lines.

The importance of the Regional Connector cannot be overstated. Any transit rider that currently travels Downtown by way of two or more transfers are poised to benefit from one-seat travel across Los Angeles – from Azusa to Long Beach and from East Los Angeles to Santa Monica without transferring lines. DTLA’s office workers, arts patrons, and tourists will all benefit, as the connector provides direct transit access to the office towers, cultural institutions, and public spaces of Bunker Hill. Increasing accessibility and connectivity greatly enhances the economic vitality of DTLA, the city, and the region, expanding opportunities for Downtowners and Angelenos in general by making it easier to get to and from Downtown to live, work, and play.

In keeping with its location in the cultural heart of the city, the Regional Connector will feature inspiring public art components in addition to providing convenient and safe access at the Metro station, Grand Avenue Arts located at 2nd Place and Hope Street. The project is estimated to be completed in 2022.

A good neighborhood is a place where people can live, work, and play in comfort and convenience. A truly great one is also accessible, inclusive, and intent on serving its thriving community in a variety of ways, with walkable access to culture and commerce, and a variety of beautiful and meaningful destinations, both indoors and out.

Once completed, The Grand, Halo, The Yard, the Colburn School, and the Metro Regional Connector developments will help create a constellation of vibrant outdoor plazas and paseos on Bunker Hill that actively connect the blossoming commercial, cultural, and civic spaces – with people in the center of it all. From the intimate local streetscapes and innovative public spaces of Bunker Hill to the massive infrastructure of the regional transit system, the transformation of this interconnected community embodies the future of DTLA.

To learn more about Bunker Hill through an immersive experience, take the DTLA Virtual: Development Tour.