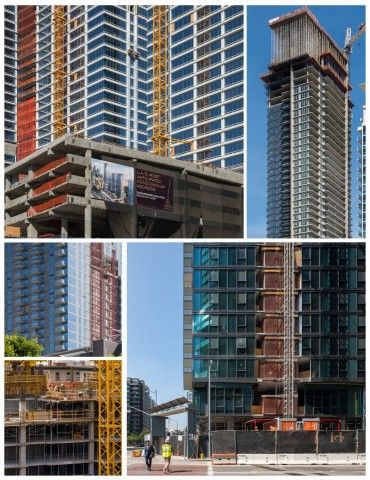 After a Record-Breaking 2017, the Downtown Market Remained Strong in Q1

After a record-breaking 2017 with over 2,800 new residential openings, the Downtown market remained strong in Q1, with news in all sectors reinforcing confidence in DTLA's continued growth.

The office sector was very active in Q1, with the $196 million sale of the Wedbush Building demonstrating the enduring value and renewed appeal of Downtown's Class A office towers. In leasing, Rising Realty announced new tenants H&M Innovation Labs and TubeScience at The CalEdison. Finally, Brookfield, DTLA's largest property owner, opened their first two Convene locations and started construction on a $60 million renovation of the plaza at Wells Fargo Center.
The big event of the quarter was the opening of the much-anticipated Shake Shack at 8th and Hill. Nearby, DTLA's emergence as a high-end streetwear mecca was boosted by the arrival of RSVP Gallery out of Chicago. In the Arts District, ROW DTLA added Boston-based fashion retailer ​​Bodega to its growing and impressive list of tenants.

With the Q1 debut of The NoMad and the re-opening of Hotel Figueroa, DTLA added two more boutique hotels to its already impressive roster. More good news is on the way with word that Journal Hotels has signed on to operate the Hotel Clark and Trinity Hotel, now slated to open next year.

Construction began on the $1 billion Lucas Museum at Exposition Park, scheduled to open in 2021. On Bunker Hill, the cultural renaissance continues, as the Colburn School announced that Frank Gehry will design their expansion on Bunker Hill, and work began on the $40 million facelift for The Music Center.